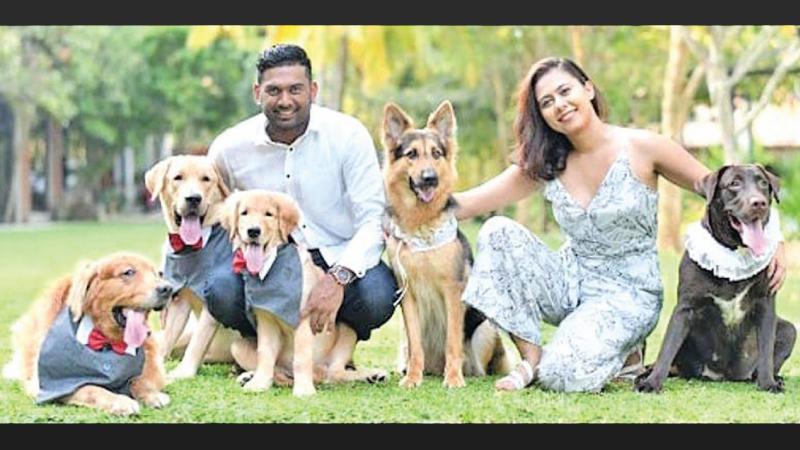 Bhanuka and his charming wife Sandrine with many of the dogs they love, which include Alvin, Brandie, Mocha, Riley, Theodore and Abbie

Little over a decade ago, then Royal College captain Bhanuka Rajapakse won the Observer SLT Mobitel Schoolboy Cricketer of the Year title in back to back years.

Having won the prestigious titles in 2010 and 2011, the first Royalist to get that rear honour, he became the man of the final in Sri Lanka’s 23-run triumph over Pakistan in Dubai last Sunday.

Rajapakse, an aggressive left-handed batsman, faced just 45 balls to score an unbeaten 71 with three sixes and six fours in the final. Thus, he had a commanding strike rate of 157.77.

Coming in to bat at number five Sri Lanka were reeling at 58 for 5 after 8.5 overs, Rajapakse completely turned the match in Sri Lanka’s favour with Wanidu Hasaranga de Silva who chipped in with a useful 36 off 21 balls.

But Rajapakse was not ready to surrender to Pakistan bowers. He joined Wanidu Hasaranga and staged one of the most magnificent fight backs, adding 68 runs in six overs to provide the backbone of the Lankan batting.

After the departure of Wanidu Hasaranga at 116 for 6 in 14.5 overs, Rajapakse was joined by Chamika Karunaratne to take the total to 170 without losing any more wickets until the end of 20th over. The most interesting moment for Sri Lanka was when Rajapakse hit a four in the penultimate ball and a massive six over deep extra cover off the final ball sent by Pakistani Naseem Shah.

Rajapakse rated his innings of 71 not out in the Asia Cup final as his best for Sri Lanka. “We always wanted to show the world – a couple of decades back, we had aggression on our side and we wanted to create those moments once again as a unit,” a jubilant Rajapakse told a post- match press conference.

“We want to keep up this momentum ahead of the World Cup and look forward to it. With the crisis happening back home, this is a tough time for all the Sri Lankans, but hope we brought some smiles on the faces of our people,” he said.

“This is to the whole nation – they were waiting for this for so long. I am glad this happened before the World Cup so that it would energize the boys for the big battle ahead,” he added. 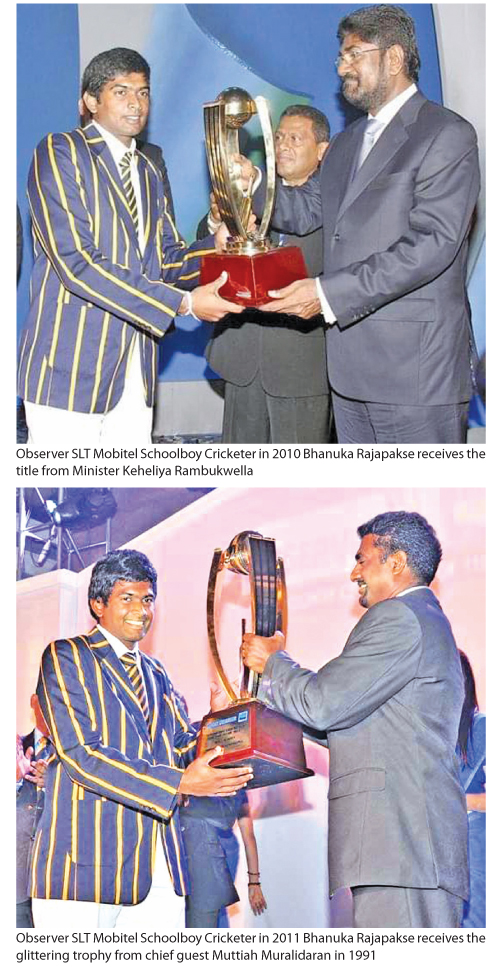 Rajapakse’s international career would have ended months before, if not for his entertaining knocks in the 2022 Indian Premier League (IPL). His brave innings in the IPL almost forced the national selectors to give him a place in the Sri Lanka team for the Asia Cup 2022. Earlier, he had a few problems with the selectors over physical fitness.

He was selected for the 2010 Under-19 World Cup in New Zealand as one of the team’s key batsmen. He lived up to his class, by finishing as the leading run-scorer for his country with 253 runs.

Prior to that, Rajapakse had an outstanding tour of Australia with the Sri Lanka Under-19 team in 2009, cracking a marathon 154 off 111 balls in a youth one-day international and ended the series as the leading run-getter.

Born on October 24, 1991, Pramod Bhanuka Bandara Rajapakse, is a product of Royal College. He is only the third Royalist to win the prestigious Observer SLT Mobitel Schoolboy Cricketer of the Year title after Ranjan Madugalle (1979, the inaugural year) and Roshan Jurangpathy (1986).

Unlike Jurangpathy, who played in a solitary Test, Rajapakse did not get any opportunity to play in Test cricket as he was at the receiving end. His 71 not out in the Asia Cup final was six runs short of his career best T20 individual score of 77.

During his promising school career for Royal, Rajapakse excelled both as an aggressive batsman as well as a dependable medium pace bowler.

Besides winning the Observer SLT Mobitel Schoolboy Cricketer titles in 2010 and 2011, Rajapakse was also adjudged the Young Emerging Player of the Under-19 Category at the CEAT Sri Lanka Cricket Awards 2011.

He initially represented the Sinhalese Sports Club in domestic cricket and has also played for Barisal Blazers in Bangladesh’s NCL T20 Bangladesh.

Rajapakse scored a career best 268 in 173 balls versus Ports Authorities for BRC at Moors ground, hitting 19 sixes and 22 fours in the innings of the 2019 Premier season. During Sri Lanka A team’s tour of India in 2019, in the second unofficial Test against India A, Rajapakse scored 110 in 112 balls with 17 fours and three sixes at the KSCA ground, Hubli.

He represented Galle Gladiators for the inaugural edition of the Lanka Premier League in October 2020. In August the following year, he was named in the SLC Greys team for the 2021 SLC Invitational T20 League tournament.

He was selected to play for the Galle Gladiators following the players’ draft for the 2021 Lanka Premier League in November 2021.

Rajapakse was bought by the Punjab Kings in the auction for the 2022 Indian Premier League tournament. He was signed by the Dambulla Giants for the third edition of the Lanka Premier League the same year.

He was named in Sri Lanka’s Twenty20 International squad for the series against Pakistan in Pakistan in September 2019. He made his T20I debut for Sri Lanka against Pakistan on October 5, 2019, scoring 32 runs off 22 balls in a 64 run victory. In the second match, Rajapakse scored 77 runs off 48 balls as Sri Lanka beat Pakistan by 35 runs. He was adjudged the player of the match for his exceptional batting performance.

After being left out for the West Indies tour and England tour in 2021, Rajapakse expressed his disappointment over being dropped from the side based on fitness standards. In an interview, he criticized the Sri Lankan selectors and Sri Lanka cricket authorities for being inconsistent with their policies. He insisted that the priority should be given to the on-field performances of players instead of fitness levels of players.

But then Sri Lanka head coach Mickey Arthur criticized Rajapakse calling him a “comfort zone cricketer” on the field and revealed that he has failed to comply with the skin fold tests in order to fulfill the required fitness levels to play in international cricket matches.

A disgusted Rajapakse announced his international retirement on January 5, 2022 at the age of 30 in a letter written to the SLC. “I have very carefully considered my position as a player, husband and am taking this decision looking forward to fatherhood and associated familial obligations,” his premature retirement letter said. But in June 2022, he was named for the ODI series against Australia.